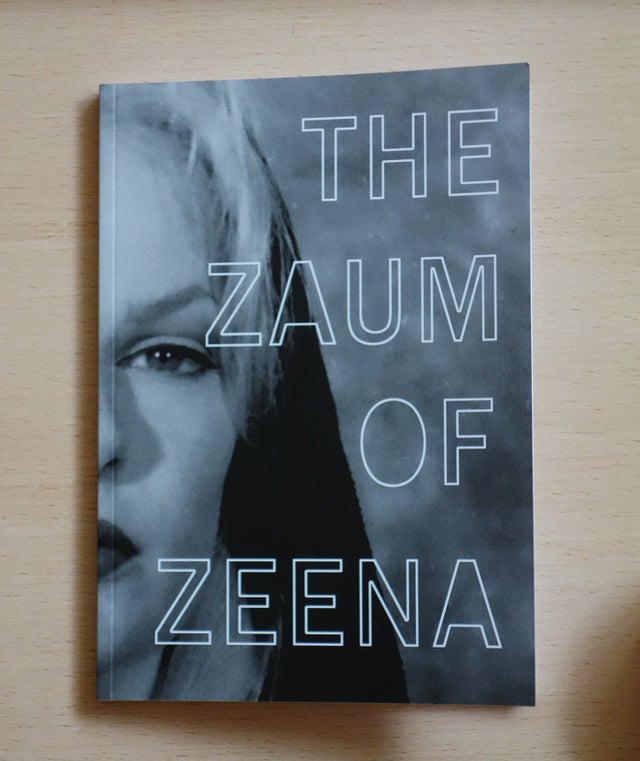 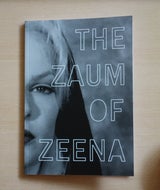 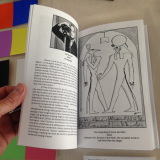 The Zaum of Zeena

SKU:
€16.00
16 26 €16.00 - €26.00
Unavailable
per item
The Zaum of Zeena
A Collection of Interviews, Essays,
Quotes and Images
by
Zeena Schreck
Edited by Frank Haines
Published by HEINZFELLER NILEISIST


The limited first edition of 50 sold out immediately. The 2nd edition in zine format, also sold out.
Now, a 3rd edition is presented in high quality soft-cover book format.


Detailed reviews by Luca Piccolo and Nicholas Diak in description below.​
Add to Cart
TWO  OUTSTANDING REVIEWS OF THE ZAUM OF ZEENA
BY HEATHEN HARVEST MUSIC MAGAZINE
AND WSF ITALIAN ART JOURNAL

REVIEW BY LUCA PICCOLO
WSF (Words Social Forum)
Dec. 2015
​
The Zaum of Zeena, published by Frank Haines in 2015, presents a "collection of Interview, Essay, Quotes and Images" from the famous Berlin artist Zeena Schreck. For those who have followed Zeena's path, this text is a highly anticipated volume which examines the artist's work, ranging from sound to visual media. The interviews present the most interesting aspects of the life, the thought and the philosophy that always accompanies Zeena.


In the first pages of this volume, it is written: "her art, like her music, is best understood as a non-verbal trans-rational branch of her spiritual teaching." The best way to understand this can be compared to the author Dante who, in his Paradiso, referred to the theological term “Gloria” as an intense religious experience that combines the vision of infinite light echoing a harmonic sound and the transcendental.


One might experience something similar while reading a poem by the Russian poet Velimir Khlebnikov, whereby the mind receives an image of transcendental luminosity accompanied by a harmonic tonal quality. We recall also that the latter, together with Alexei Kručënykh (another futurist poet), gave rise to that Phonosymbolic language called Zaum (Заумь), a phenomenon after which this book is titled.


But in order to have this kind of transcendental experience from a work of art, one needs to develop and learn how to use one's sensory perception in a most supernatural way. Therefore, in the case of Zeena's work, we can only begin to understand the deeper dimensions of her art and music, which are so closely linked to her spiritual path, by developing our own senses and spiritual awareness. We might then come to understand how it is that her creations are "a non-verbal, trans-rational branch of her spiritual teaching." In fact, this is the main theme of the first interview in this book, which happens to be my own interview with Zeena, originally published in WSF (online art journal).


This is followed by excerpts from the interview with the author Konstantinos that focuses on exploring spirituality and the magical path of this artist. A theme which is then expanded upon in a different way in the wonderful interview with Che Chetty (for the School of Religion, Philosophy and Classics, University of Kwazulu Natal, South Africa), where certain aspects of Tantra are analyzed and investigated. In this series of questions and answers we see two alternating fronts: the academic vs. the practical knowledge.

The interview by Maxime Lachaud, drops us completely into the musical dimension of the artist, and investigates mainly the work that Zeena made with recordings for Radio Werewolf. Also relevant to her work during Radio Werewolf is an extract from "Mythos Wewelsburg: Fakten und Legenden" by Daniele Siepe, in which the artist explains the reason for a particular position/asana she takes in a scene from her Video Werewolf film "Germany: The Theory of Ruins" (1992). Both of these interviews make us reflect on the meticulousness that the artist uses for the realization of every single opera. With this in mind, it spontaneously came to my mind how the composition of this volume was not at all left to chance.


Also included in this collection are two writings by Zeena originally published in the Beatdom Magazine # 11(referring to "Liberation under the Snow Moon," the story of a salvific mission to free captive wolves from a fur farm) and Vice Magazine ("A Tale of Two Birds and Tantric Meditation").


All the interviews are linked together through a series of quotes and images, which greatly augment the value of the text and make for a most pleasant and smooth reading experience. Between the lines we also see beauty and clarity: perhaps the two most emotionally engaging effects of this publication.
This is a text that gives to the general public the opportunity to understand Zeena Schreck and her art. It is certainly a must read by anyone interested in the spiritual and artistic aspects of Zeena. But also for those who have only a marginal interest in these topics, it is still a treat.

“The Zaum of Zeena” Edited by Frank Haines

One of the standout qualities of iconic individuals in the post-industrial underground is their ability to
be successful in a variety of mediums. The subject matter they explore—occultism, history, literature,
magic, criminals, film, Grail studies, taboo topics, etc.—crops up in their songs, short films, books,
poetry, art, photography, and a plethora of other outlets. Correlating such output is a daunting task. In
the earlier days of the internet, musicians made webpages, fans made fan pages, and forums and
webrings were the standard means to stay up to snuff. Today, one has to dive through Facebook and
Twitter posts to get a handle on what these multifaceted musicians are all about. It’s refreshing when
artists-turned-authors rely on the tried and true method of releasing a book to aggregate their
philosophies, art, photography, and other personal anecdotes. Gerhard Hallstatt set a benchmark in the
neofolk scene when he published Blutleuchte a few years ago, and a peppering of other artists seem to
be following suit.
Zeena Schreck is a multi-media artist, writer, musician famous for Radio Werewolf, and Tantric
Buddhist whose artistic output spans decades. Her newest literary offering is The Zaum of Zeena, a
softcover that straddles the zine/book format that debuted at the tenth annual New York Art Book Fair
at the MoMA PS2 this past September. The alliteration in the title is a re-appropriation of a term for a
Russian art movement during World War I that encompassed many fields. In the case of The Zaum of
Zeena “zaum” is being used as an umbrella term for Schreck’s many endeavors that are showcased in
the book.
The majority of art included in The Zaum of Zeena exhibits Schreck’s photography and illustrations
rendered in pencils or inks. Viewing her artwork in this format creates a paradoxical experience for
readers of The Zaum of Zeena. On one side, the black-and-white versions of the artwork takes on a
unique meaning when realized in the zine medium. It imparts on the pieces a weight of angst, rebellion,
or transgressive attitude, all stemming from either a punk or D.I.Y. ethos. Such attributes may not have
been present in the artwork before, but they now carry it. In this case, the medium can either alter or
enhance the message, and Schreck’s artwork is subversive enough that this multi-prong approach
works.
On the flip-side, however, the zine format does not convey the artist’s original vision in the best
facsimile. Colors become lost and shades become either muted or abrupt. There is anexcerpt from an
interview with Obsküre within the zine in which Schreck argues that listeners of digital versions of
music are missing out on needed context that the original physical release provides. This attitude can
also be applied to these versions of Schreck’s graphic work—that experiencing them in this fashion
muddles the original meaning and context. While the zine format is satisfactory at giving an appetizer
of Schreck’s art, it does demonstrate the need for a Taschen-esque book to give her work a presentation
that is as close to the original as possible.
The real treat and highlights of The Zaum of Zeena are found in the many excerpts of interviews and
personal writings of Schreck that comprise the majority of content in the book. The five interviews and
two penned essays consolidated within provide a succinct overview of Schreck’s activities for the past
twenty-five years along with glimpses and elaborations on her personal philosophies. For example, in
the interview with the Italian art magazine WSF, Schreck elaborates on the artistic path she has walked:
she describes her art as being both communication between realities and dichotomies, but also a
reflection of experiences both personal and shared. The interview with the author Konstantinos turns the
dialog to the spiritual and the magical. A particular highlight with this interview is that Schreck states
that many folks say they are on a path to discover a truth, but she underscores that such a path calls for
a certain amount of sacrifice to one’s personal comfort while challenging what they believe in their
world; often, their statements are just veneer. In brutal and biting honesty, Schreck says, “look at the
world around you and tell me that it appears to be filled with people genuinely in search of the truth!” It
certainly calls for a pause of reflection, regardless of anyone’s personal affiliations.
The two personal stories, “A Tale of Two Birds and Tantric Meditation” and “Liberation Under the
Snow Moon,” spotlight Schreck’s proficiency at storytelling while conveying deeper, personal
philosophies without being heavy-handed. For example, in “Liberation Under the Snow Moon,”
Schreck recounts her experience helping a group of eighty Mongolian wolves that were en route to a
French wildlife preserve, saving them from a fate of being turned into coats. She peppers her story with
references to the She-Wolf who birthed Rome’s founding siblings, Romulus and Remis, and to the wolf
Fenrir of Norse tradition. This gives the account spiritual weight: a gentle reminder that our modern
lives are without reverence to the natural world. The Zaum of Zeena was originally released in a
limited run of fifty copies to be sold at the New York Art Book Fair with any remaining copies being
offered by Schreck’s web store in late November. Upon this re-offering, the zines quickly sold out, and
a second edition release was immediately put into production. The zine/book is fairly short, but its
content is dense. Those unfamiliar with Schreck’s work will definitely have a better appreciation and
understanding of her work after having read it.
_____________________________________________________
Review Written by: Nicholas Diak
Publisher: Heinzfeller Nileisist
Editor: Frank Haines
Publication Date: September 18, 2015
File Under: Music / Music Biography / Art / Photography
Language: English
ISBN: N/A
Format: Paperback
Pages: 84